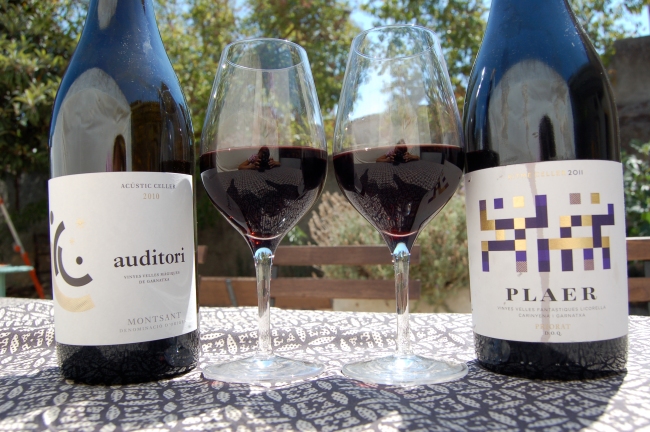 I had heard about Albert Jane from his brother Gerard, and others that had already had the opportunity to try his wines first hand, before visiting Acustic Celler. Told myself, over and over again, we should visit him in Marçà to see what all the fuss was about. It was like the days before Christmas. You know something nice is going to be wrapped in those presents under the tree. We got to meet a great winemaker and try his wines in the vineyards, where they were born. If the vine could sing, I imagine lyrics like……., “That I can change the world, I would be the sunlight in your universe……… 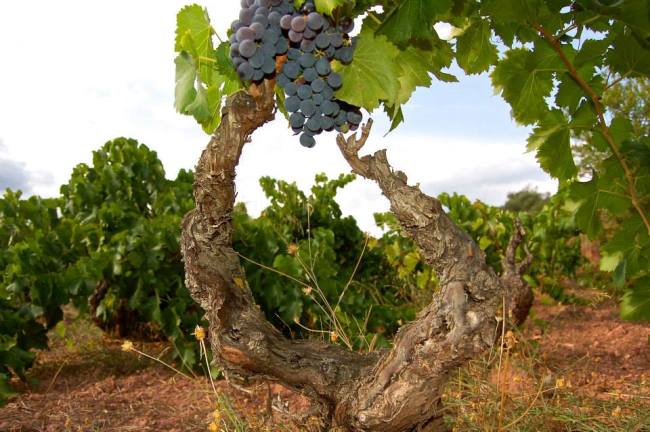 Barcelona – Marçà, an easy 1 hour 40 minutes drive, southwesterly direction and way closer to the ancient city of Tarragona. Off course, one must take into consideration the temptation to maybe stop for a winery visit in Priorat, as it is on the way. Several signs trying to lure you to visit cellars, none of which are bad. Now, this time, that was not the reason we were slightly late for our appointment, rather the fact that we missed the winery and had to look for it in the village. The GPS hadn’t been updated for quite some time so the address was not coming up.

Normally, in these small villages, people will know where the wineries are located, so we were surprised that none of the four people we asked, knew where it was. Is this winery supposed to be secret? Maybe I should stop writing right here? Had to call Albert and found the place within minutes. Thankfully, we were not the only ones being late, as the visit was a joint one with one more person. It doesn’t matter if you are late, as long as someone is later……….

The origin of the name “Marçà” comes from the latin word “Martius”, which could either be translated as the month of March or the planet of Mars. Hence, the name is probably implemented by the Romans, as it is a known fact that they were highly present in this area for quite some time. The church of Marçà is already mentioned in the Pope Anastasio IV’s “bula in 1154. The Marçà Castle appears for the first time 1153, as being mentioned by Ramón Berenguer IV. In 1241, Guillem d’Entença’s wife, Alamanda became the owner of it, ant the title became possession of the Entença Barony. In 1324, Jaime II gave the castle to his son Ramón Berenguer, and it happened to be a part of the Earldom de Prades.

In the 15th. century, some of the inhabitants of Marçà started to live down the hill. The inhabitants took the stones of the old village to build up the new one. Finally, the village was placed in its modern place in the 18th. century. At the end of the 18th. century, even though the population experienced a demographic increase, the village had serious troubles to pay its taxes. Carrasclet was a guerrilla fighter who used to live in Marçà with his wife (who was also his daughter), started to fight against Felipe V.

At the end of the 19th. century, the filoxera plaque deeply hurt the county, but Marçà did not suffer so bad because of the railway, which arrived to Marçà in 1891. This smoothed the crisis, and became for some years the best way to buy or sell the agricultural products of the Priorat. Today, one can eat really well at the railway restaurant Les Agulles in Marçà. 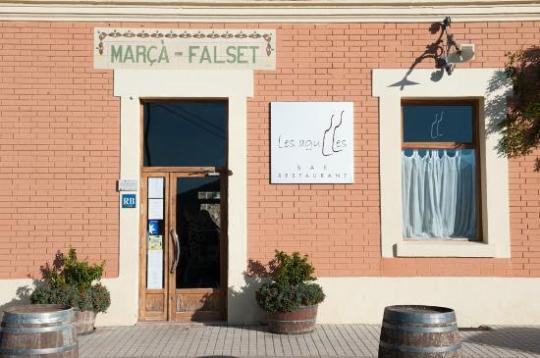 Albert Jané is the son of Benjamí Jané, proprietor of the winery Jané Ventura in El Vendrell (DO Penedes). He has inherited his father’s prudence, meticulous work and love of terroir. One thing is certain and very evident once you get to talking with Albert, he is a very passionate winemaker. The kind of guy I can imagine sleeps amongst his vines. The two projects, housed in one winery, are Acustic & Ritme. The former representing DO Montsant and the latter DOQ Priorat. 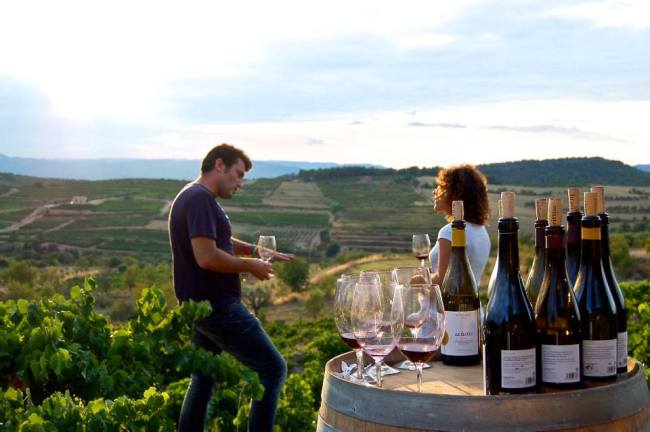 During the visit his references are clear, the terroir, the vines and the love for wine is surfacing the whole time. I would have to say that Albert is modest in his claims but firm in his convictions, Alberts wines are made using traditional techniques, similar to “acoustic” music and that too would be his interpretation of the terrior. The wines are ​​only produced from native varieties: Carignan (Samsó), Garnacha Negra and Sumoll, and white Garnacha Blanca, Macabeo and Pansa.

The philosophy of Albert Jané put into one sentence might be “Back to the roots, to the uniqueness of the native environment expressing the deepest of these invincible vineyards guarded by the majestic mountain of Montsant”. Acústic Celler maintains a small production of only one hundred and twenty thousand bottles. 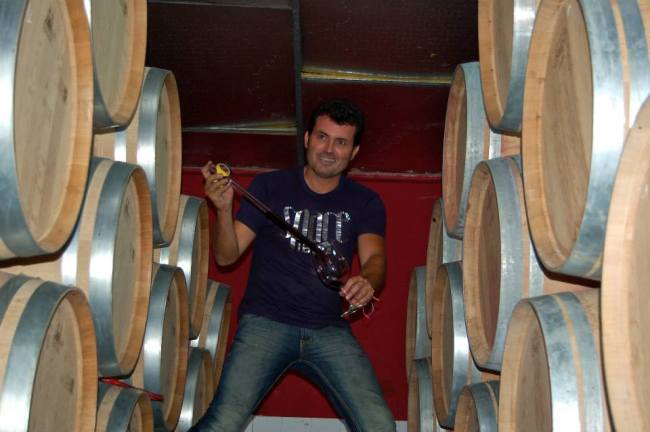 The challenge I have while tasting Alberts wines, is that I can’t stop tasting! As I will have to return to both Acustic Celler and Ritme Celler, to be able to convey my tasting notes for the other labels, I will try to describe two for now. Hopefully in a objective way but that might be very difficult, cause I really really LIKE these wines!

Auditori 2010, Acustic Celler, DO Montsant, 100% Garnacha. Pure pleasure, and as the top wine of Acustic Celler it displays and conveys the elaboration and terrior to perfection. Grapes from three old Garnacha vineyards, all 70 years and older. A full-bodied sensual sensation, with well ripened red fruits, cherry is clear. I distinguished some licorice  and a little spiciness  with clear oak as it progressed. Medium long finish. Nicely integrated tannins. Could easily stay in my cellar for another 4 years. The downside…….., not enough bottles on the market!

Plaer 2011, Ritme Celler, DOQ Priorat, Carignan (Samsó) 80% and Garnacha 20%, produced from vines between 40 and 60 years, grown between 300 and 650 m altitude, on licorella (slate). Aged for 12 months in French oak barrels. This wine is not filtered or clarified, so you may find deposits. Ripe blackberry and cola aromas, hints of black pepper, smoky minerals. Washes over the palate with dark berry flavors. Closes bright and long, with gentle tannic grip and a zesty mineral quality. This wine has an attractive bouquet, the oak is evident but integrated with the fruits. The palate has a satisfying, succulent entry with fine acidity. Plaer is the Catalan word for pleasure, I say no more!