White wine with a golden yellow hue and greenish tones. Complex aromas reminiscent of pineapple and mango, with certain notes of apple and apricot. Unctuous, long and persistent on the palate. The finish culminates in floral and fresh mint aromas. The land we now inhabit has known other names and other cultures. The “Ilercavones” (the Iberians who lived in the Terra Alta and the surrounding areas from the 6th to the 1st century BC, and who named them), had a culture which left its unmistakable mark on the land – and can still be seen today, a testament to a productive and prosperous past.

The quality and characteristics are essentially or exclusively due to its geographical origin, with the inherent human and cultural factors. It possesses a certain quality, reputation or other specific characteristics attributable to its geographical origin. In addition to the above, the following must also apply. 100% of the grapes come exclusively from the geographical production area. The production takes place within the same area and distillation is obtained from grape varieties belonging to Vitis Vinifiera.

Wines bearing the DO distinction are prestigious Spanish wines produced in a demarcated production area and are made according to parameters governing quality and type. Each DO must be regulated by a Governing Body (Consejo Regulador) that is responsible for ensuring the use of grapes of the authorized varieties, and compliance with parameters governing production per hectare, approved methods of wine making and ageing times.

In order for wines to be given Denomination of Origin status, the production area is required to have been recognized over at least the previous five years as a region producing quality wines with a geographical indication. Catalonia has 12 DO:s! That is more than any other wine making area of Spain. And now you know why I live and work in Catalonia! With time, all of them are going to be covered in more detail. For now I am just going to focus on the chosen one, the D.O. Terra Alta.

D.O. Terra Alta is located in the very southwest of Catalonia, as far away from Barcelona as one can travel without exiting the region.

Being one of the most picturesque and beautiful nature areas of Catalonia, the great Picasso had his field days here and many of his paintings feature scenes from these lands. Historically, because of being very isolated, this area traditionally only made wine for local consumption and has only recently started to produce modern Mediterranean style wines. During the Roman times, the road going from Zaragoza to Tortosa passed through the area. This is probably when grape growing was first introduced. In the Middle Ages, the Knights Templar planted vines, but the geographical distance to markets and to ports meant that a lot of vineyards were converted to olive groves instead.

During the 19th century the vinos rancios (rancid wines) from Terra Alta, such as “Amber Blanc” attained great fame. However, the area was devastated by the outbreak of the phylloxera. The current vineyards were replanted between 1920 and 1950, the cooperatives played a pivotal role.

The varietals authorized in Terral Alta, both traditional and of foreign origin are the following.

D.O. Terra Alta acquired official status in 1982 and there are currently 8,200 ha covered, with 1,800 grape growers and 42 wineries registered.

One of the wineries is Altavins in Batea. The winery is a project set up in 2001 by Jordi Casado and Joan Bautista Arrufi i Pieg. With 120.000 bottles produced each year it is to be considered small but then again I have visited wineries that only make 5.000 a year. I guess it is highly relative. The vineyards are located at 350 and 550 m above sea level, characterized by plains, high plateaus and valleys.

It enjoys a dry Mediterranean climate with little rain of up to 450 ml per year. The sunlight is plentiful, and is influenced by two prevailing winds – the Cierzo, which arrives from the Ebro Valley, and the “Garbi” or sea wind. Due to the very small amounts of rain, there is hardly any fungal disease, allowing for more sustainable practices, and the Cierzo (which is blowing throughout September) allows the grapes to ripen naturally on the vine.

The nature of the soil provides the grapes with an exceptionally high concentration of minerals, and the considerable temperature changes between night and day while the grapes are ripening maximises the aromas and flavours of the varietals. The wines produced include whites made from White Garnacha grapes, which are typical of the Terra Alta and grown in vineyards which are at least 45 years old. Red wines are made from Cariñena and Black Garnacha grapes, from vineyards established at least 60 years ago. The wines are fruity, with finesse and elegance in-bodied in them by the wooden casks in which they are stored.

Traditional, yes! But even though the Cariñena and Garnacha are the primary grapes planted by Joan, he still sees the importance of working with international varietals, such as Chardonnay and Syrah, leading him to create great wines with exceptional results. If the wineries in Priorat are small, this one is petite. A garage, no bigger than our first flat in Barcelona. And to be able to churn out 120.ooo and some bottles, takes both passion and craftsmanship. A true wine lover should peel his or hers ears to the future tunes of this young, new generation Spanish, wine maker. “Alta Vins” meaning “Top Wines,” refers to both the exceptional quality of his wines, as well as the altitude. With hills well over 400 meters, his vines have a long ripening cycle, and therefore, take on significant complexity. 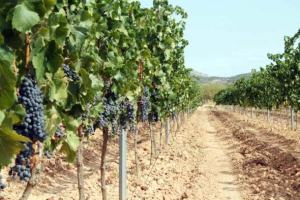 Almodi Negre is another cool wine made by Altavins, 100% Garnacha Borruda (Yes, Garnacha Peluda/Garnatxa Pilosa is the same varietal, Hairy Grenache). Garnacha Peluda is a varietal that grows in the regions of Aragon and Catalonia in Spain. It produces clusters of medium sized grapes which are rather compact. The grapes are oval with medium thick skin and covered with a villus from which it takes its name. The Garnacha Peluda produces wines of both high quality but also of high alcohol level. As the fruit notes are extensive in this grape, it has been used for blends traditionally. Not many producers use it for monovarietals, although this is changing in Catalonia. 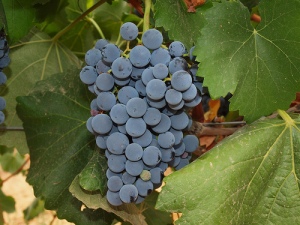 Altavins produce a range of wines, both red and white out of which it is difficult to find a favorite, I can drink them all and as I love wine, I’ll refrain from labeling any of them being better than the other!