Wonderful day ahead! During 2014 there are many more wines to be tasted. Tonight I’ll be joining 40 wine lovers in Falset at the Hotel-Hostal Sport. Initiated by the owner, Marta Domenech Tomas, we are going to do one tasting per month, each covering one D.O of Catalonia. 12 D.O:s in total, this is my home game! 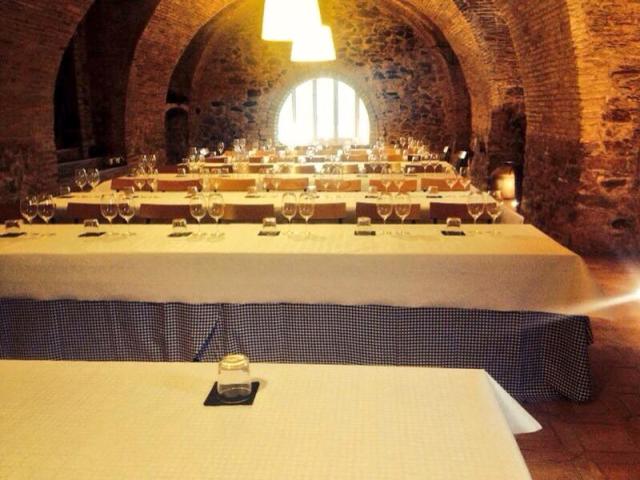 Tonight’s tasting is all about D.O. Terra Alta. Staying true to todays theme I am covering one winery, one wine, from Terra Alta as well. So far my plan is working. One wine per day for 365 days, how hard can it be?

Awarded D.O. status in 1985, Terra Alta is the one wine region located to the very south of Catalonia, within the province of Tarragona. The region has over the years gained reputation for producing some the most interesting wines in Spain, elaborated from the native Garnacha Negra, Garnacha Blanca and Carignena. Todays wine is a red but there will be a write up on the whites from Terra Alta. Why? 80% of Garnacha Blanca produced wines in Spain, come from Terra Alta! If you do something good…….

The altitudes here are the highest in the area, with the mountain peaks reaching heights of up to 950 meters. The climate is Mediterranean/Continental, hot long summers and very cold winters. A local dry wind, El Cierzo, originating from the west (The Ebro River), is hugely important  as it moderates the temperatures, providing breezes which prevents fungicides, during the growing season.

Edetaria is a modern style cellar, purpose build in 2003, with a mind blowing setting in the midst of the vineyards, olive groves and with the backdrop of mountains. Located in the valley of Gandesa to the sounth-west of Priorat.

The projects is that of Joan Angel Lliberia, one of Terra Altas foremost personalities, prmoting Terra Alta on every possible occassion. His gradfather used to work the vinyerads, producing bulk wine, like most vintners did in the region in those days. The father, Angel, took over and started selling the harvest to the cooperative, during which time Angel studied in France for ten years to become a winemaker.

Terra Alta is the next big thing! A region with a long winemaking tradition, which is now trying to copy the quality and commercial success of Priorat and Montsant, and doing it quite well. Edetaria and Joan Angel, being a top producer in Terra Alta, is leading the way. Varietal expression, low yields, creativity and improvisation are some of the tools used.

Looking at their logo, you’ll see the letter “t”, laid out horizontally. The “t” stands for terra, which in Catalan means land. Quite nifty I think!

Being a Single Estate winery, means that they produce wine from their own vineyards. It is a matter of quality control, from grape to bottle, as the philosophy here is that the most important factor in the process is the vineyard.

Out of the 30 hectares planted, the majority contains Macabeu, Garnacha Blanca, Garnacha Negra, Peluda and Carignena, being native varietals. There is some international varietals as well. Garnacha is the main player, with the Edetaria Edetana being in the forefront, trying to show of the best the Garnacha can offer.

A small part of the Garnacha Negra has mutated into Garnacha Peluda, which means “hairy”. The back of the leaf has transformed and developed hairs on the back of the leaf, thus retaining the moisture better and enhancing the acidity in the grapes. 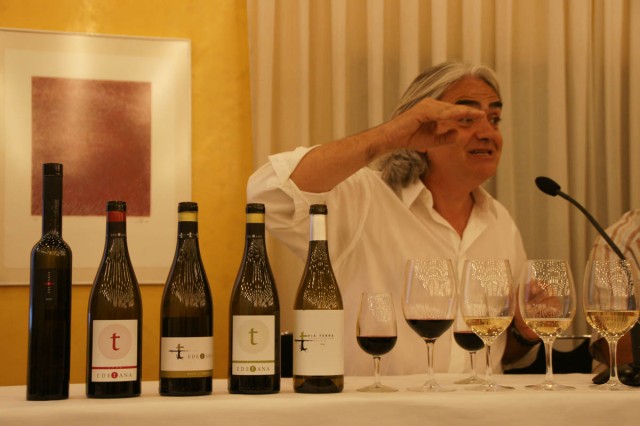 “In the cellar we only work with big barrels to retain the aromas of the terroir. We use only natural yeasts to show the maximum authenticity”, says Joan Angel. The grapes are collected into small crates to cover the short distance to the cellar, trying to keep the as fresh and as cold as possible. 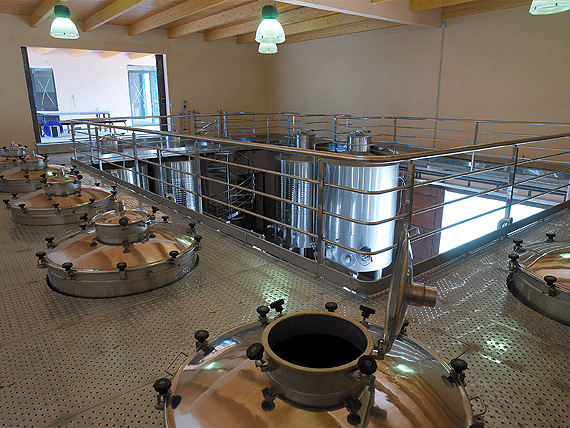 Fermentation tanks are small (1000 – 9000 litres), designed to keep the different terroirs and grape varieties separate during the winemaking process and fully express the qualities of all the individual plots. Ageing is carried out in 300 litre oak barrels.

The wine is made from 60% “Garnacha Peluda” from a “còdols” soil, 30% Syrah from “vall”soils and 10% Carinena from “tapas” soils. Skin contact takes place for between 20 and 30 days, using both the pump over and push down methods to extract the maximum amount of character from the floating skins.  Each individual variety is then aged in 300 liters French oak barrels for 12 months before being blended and bottled to give a fully rounded and well-balanced whole.

Intense red color, slightly opaque. The primary nose is that of menthol and quite soothing. Red fruits appear, mostly cherries and raspberries there are also notes of spices, and cocoa. Very fresh and lingering nose. On the palate the attack is powerful but silky, round and well integrated tannins. Elegant and well-integrated acidity. Woks well with game and can work with cheeses.