…., if you haven’t watched Treme, the series, you should! Likenesses in the culture of New Orleans, the food and the music can be, with imagination, related to the Priorat wines. They carry the same kind of Ooh Poo Pah Doo, makes your body want to move and dance. When watching an episode of this very fine series, there should always be a open bottle of Priorat red available, makes it so much better! Trio Infernal wines are highly suitable for these occasions. Thanks Bacchus it’s Friday, let the good times roll!

The village of Torroja del Priorat is located in the heart of the Priorat and is the place where the headquarters of the Regulatory Council of the DOQ Priorat is located. The environment of Torroja has a very irregular topography, the presence of slate there is widespread and summer time here is more pronounced in terms of contrast, than n other parts of the Priorat. These features make the wines from Torroja very characteristic, so it is no surprise that some of the best/heaviest (read different) wines come from this place. 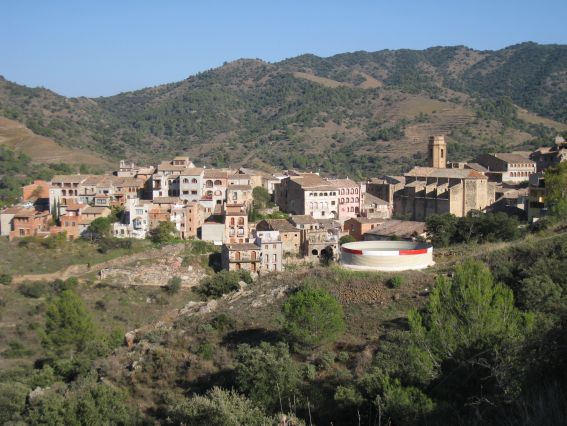 The name comes from the Red Tower, a watchtower built by the Arabs in the tenth century and first mentioned in 1270. The document in question is the certificate issued to the population of Poboleda, in which the term Torrogia is mentioned, and in the days part of the Carthusian priory of Escaladei. 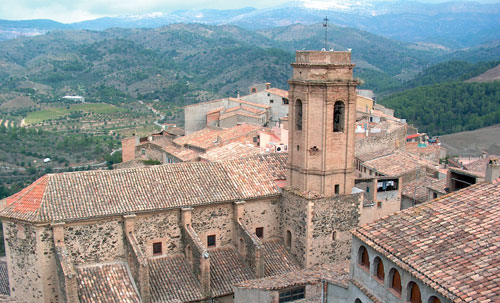 The parish church is dedicated to St. Michael. It is a building consisting of three ships built in the eighteenth century. It is in neoclassical style with Baroque elements. The body of the temple was built in 1800 by Joan Pere Cavaller in French romantic style, with Catalan elements. Very few parts of the old fortifications remain. There are small traces of the Saracen tower that gave name to the village. The door and a gate of an antique prison are also visible. Torroja celebrates its festival on September 29, the feast of St. Michael. One of the best days to visit Torroja!

The main economic activity is agriculture. Highlights the growing vines , almond , hazelnut and olive. Agricultural cooperative has existed since 1934. How many people live here? 134! How many of them drink wine? 135! Some of the wine drinkers also tend to be wine makers! Surprise, surprise!

The movie, Le Trio Infernal, is based (loosely?) on a true story about the attorney Sarret. Making the acquaintance of two lovely german sisters Philomene and Catherine Schmidt, Sarret seduces them both. He then invites the sisters into his latest scam: marrying and murdering gullible men and women, then cheating their insurance companies. You just can’t trust the French….., unless they make wine in Priorat! I have no clue whereas the winery Trio Infernal has any such scams going, what I do know is that their story is 100% true!

THE TRIO INFERNAL is a project set up in the Priorat duirng 2002 on the initiative of three renowned vintners of the french Rhone Valley. It is based on twenty year friendship and the desire to create a common project in a new viticultural region known for having the potential to grow great wines. The vintners are Laurent Combier (Domaine Combier, Crozes Hermitage), Peter Fisher (Chateau Revelette, Aix en Provence) and Jean-Michel Gerin (Domaine Gerin, Cote-Roite). Fascinated by this region, they decided to settle in the heart of this valley, in Torroja del Priorat.

Their wines showcase the delights of Priorat’s signature grape Garnacha, alongside Carignena (the trio coming from Rhone, that makes sense!) and sum up the virtues of contemporary Spanish winemaking; They are Old World (French) in the soul, tradition-bound wines, yet at the same time they are innovative and provocative. They combine the flamboyant, fruit-forward excitement of modern winemaking with the complexity and power of old vines.

But it is so much more and exemplefies the Priorat very well! The whole wine making wolrd is gathered here, from the start there was Rene Barbier, Alvaro Palacios, Carles Pastrana, Daphne Glorian etc. etc. And it just continues, everybody want s too make Priorat wines and for some it’s like shooting a elephant in a very small room. A can’t miss siutation, or that just might be what they and everybody else thinks!?!

Jean-Michel Gerin saw the old vine terraces on this one-of-a-kind property in Priorato and he thought it was his native Cote Rotie — with one difference. Down on the Mediterranean coast of Spain, the sun always shined, the Grenache and Carignan reached optimal ripeness year after year. In Cote Rotie, each vintage was a crapshoot. When Peter Fischer saw Trio Infernal, he looked at the rugged soils, the gnarly vines, tasted the sweet berries just before harvest and wondered why things weren’t this easy back in Provence. And when Laurent Combier first laid eyes on these magical terraces 10 hours — or a three-hour prop plane ride — from Crozes Hermitage, he just thought, “C’est trop facile (It’s too easy).”

Only five years later, the Trio was recognized as the leading producer in Priorat. Raving reviews, article in every noteworth wine magazine and top scores all over the board. By 2007, Clos Erasmus, Clos Mogador, and Alvaro Palacios found their match in Combier, Fischer and Gerin. The same year they even considered expansion. It was the gold rush era in Priorat and the Frenchies were carving it day by day. Then…., the bubble bursted. The crisis hit hard throughout Spain and Priorat was no exception. But it is only the man without the plan that suffers, the Frenchmen had a backup plan.

Sensing or knowing the crisis would hit, as is the case historically, they had a backdoor. Setting aside part of their, by the time, well renowned 1/3 series and focusing on their “crisis management” wine. The Riu was born out of hardship and blended with the, during that time, hard to peddle 1/3 series. The old vines from the 1/3 giving body, charisma, muscle tone and the younger wine the makeup, the combo worked just fine. A very different Priorat and affordable! 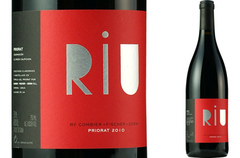 Cherry to slight purple color with great tears. Loads of fruit, intense aromas of black fruits. Slight vegetal but only hints. Licorice and some floral notes. Secondary, after quite some time, gives off a mineral feel as well as balsamic and spiciness. The palate is rich, structured, with length and supported by a great acidity and powerful but gentle tannins. More balsamic aftertaste than in the nose. Fruity aftertaste, hints of violet and licorice. A concentrated, elegant and fresh Priorat.